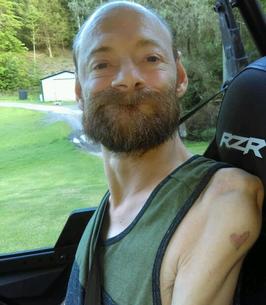 HAYSI- Danny Craig Willis of Bartlick Road passed away Thursday, November 17, 2022 at Norton Community Hospital with his mother and two sisters by his side. Danny was born with Lesch Nyhan Syndrome, a rare disease that the family thought of as part of Danny. He laughed, loved, and made everyone around him smile. Regardless of his disability, he was a fighter and fought till the end. His family took the best of care of him as evidenced by Danny being the oldest living man with the disease. Born in Aberdene, MD he was the son of Brenda Wallace Willis and the late William Patton Willis. He was a 1991 graduate of Haysi High School in Special Education. He attended Generations Adult Day Care. Danny was dearly loved by his family and friends.
In addition to his father, he was preceded in death by his maternal grandparents, Bill and Evala Wallace, paternal grandparents, Irene Fuller and Buster Willis, two uncles, Jamie Willis and Byrd Fuller and two aunts, Teresa Compton and Marie Wallace.
Survivors in addition to his mother are two sisters, Chancy (Todd) McCormick, Manchester, TN and Chandra (Hobie) Wright, Haysi, VA., two nieces, Mystique Mullins and Dasaney Bartley, four nephews, Will Willis, Xavier Bartley, Tavin McCormick and Case McCormick, great nieces and nephew, Hadleigh, Ashelia and Kamden, step grandmother, Brenda Willis and several aunts and uncles.
Funeral Services will be conducted, Friday, November 18, 2022 at 7:00 p.m. at Haysi Funeral Home with Elder, Rick Mullins officiating. Pallbearers will be Todd, McCormick, Willie Rasnick, Xavier Bartley, Will Willis, Lakota Mullins and Stevie Rasnick. Honorary Pallbearers will be Pete Wallace, Darrell Wallace, Tavin McCormick, Case McCormick and Levi Hall. The family will receive friends after 6:00 p.m. at the funeral home prior to funeral services.
The family have requested a private burial. Online condolences may be sent to. www.haysifuneral.com.
Haysi Funeral Home is in charge of arrangements.

This obituary is protected by copyright by Haysi Funeral Home. Proudly Serving the Communities of Haysi, Dickenson, and Buchanan Counties. Haysi Funeral Home is located in the state of Virginia, United States.

All rights reserved. This obituary is also archived at obittree.com